Quotes are the containers, they contain not only the thoughts and inspirations, but the life learned lessons, memories, and the things that sometimes work and sometimes not. Words can inspire, words can motivate, and words can rejuvenate the inner strengths, capable of both inflicting injury and remedying it. So chose them wisely. Our today’s blog post is about the beautiful combo of the words it is about wise quotes, the “5 inspiring educational quotes” of famous figures of history. So, let us have a brief overview of these all.

The foremost is Maimonides famous quote, which is still the talk of the town. So, how many of you still remember these wise and famous words in the upcoming image? A Few Words About Maimonides

Maimonides, Moses Ben Maimon, (1138-1204) was a Jewish Philosopher. His thoughts have a great impact on Jewish philosophy. His acronym was Rambam. In the middle ages, Maimonides was a famous Torah scholar. He also codified Jewish law. “Education without values, as useful as it is, seems rather make a man a more clever devil.” (C.S. Lewis)

A Few Words About C.S. Lewis

Clive Staples Lewis was born in Ireland in 1898 and died in England in 1963. He was an Irish-born novelist and scholar.
He was the author of 40 books. The theme was mostly Christian apologetics. The Chronicles of Narnia is his greatest creation. The children’s famous fantasy, “The Lion, the Witch, and the Wardrobe” is also the creation of his genius mind. “Upon the subject of education … I can only say that I view it as the most important subject which we as a people may be engaged in.” (Abraham Lincoln)

A Few Words About Abraham Lincoln

Abraham Lincoln was the 16th president of the United States. His tenure is from 1861 to 1865. He took his people out from civil war, which was the country’s constitutional and political crisis in his time.

A powerful voice against slavery was Abraham Lincoln’s voice in his time. Taught himself by reading at maximum. In history, it is written how he struggled to fulfill his thirst for reading, as he traveled for miles to borrow a book to read. His leadership made the country strong and unified as he was of the view that; “A country divided against itself cannot stand.” His contribution to his country and in freeing the slaves is remarkable. He was a true voice and famous for propagating democracy. “If you think education is expensive, try ignorance.” (Andy McIntyre)

A Few Words About Andy McIntyre

Andrew John McIntyre is an Australian rugby union player. He played from Toowoomba in Queensland. His momentous pushover against Wales in 1984 was always remembered. When he retired, he was the most famous capped prop of Australia. “Have you ever been at sea in a dense fog, when it seemed as if tangible white darkness shut you in and the great ship, tense and anxious, groped her way toward the shore with plummet and sounding-line, and you waited with beating heart for something to happen? I was like that ship before my education began, only I was without a compass or sounding line, and no way of knowing how near the harbor was.“Light! Give me the light!” was the wordless cry of my soul, and the light of love shone on me in that very hour.” (Helen Keller)

A Few Words About Helen Keller

A lady with disabilities proved that even the disabled may live a remarkable life if they do not lose hope and struggle. Despite the fact she was blind and deaf, she is known as the leading and remarkable humanitarians of the 20th century. Helen Adams Keller was an Author, political figure, and teacher as well. Helen is the very 1st deaf-blind person who earned a bachelor of arts degree. Keller was an outspoken lady of her time. She was born in 1880 and died in 1968.

Before Concluding our 5 Inspiring Educational Quotes, let us add a bonus quote for you. These are the words of the student of Plato the great, Aristotle. These lines can be found in Aristotle’s famous works like Nicomachean Ethics and in Politics as well. 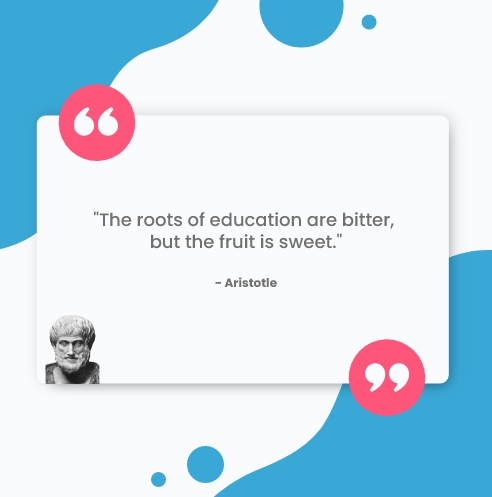 “The roots of education are bitter, but the fruit is sweet.” – Aristotle

A Few Words About Aristotle

These are the words of the famous Greek philosopher Aristotle. Who knows not about such a profound name of the Classical period. Aristotle was the student of Plato. A famous school of philosophy, Lyceum, was founded by Aristotle as well. From logic, metaphysics, philosophy of mind, to ethics, political theory, aesthetics, and also in non-philosophical fields, he added value, which is still read and mastered as the subject matters. His ideas bloomed into different fields, many resisted his thoughts, went into debates, but it got a huge readership. He was born in 384 Before Christ and died in 322 BC.

Finally, I would say pass these wonderful lines to others whom you care about. These are life-changing words and will certainly inspire someone’s life.

Remember, One wise word can change someone’s entire life. So forget not to spread these all.